DISMANTLING RACISM IN THE CRIMINAL LEGAL SYSTEM AND POLICING REFORM

Civil unrest as a response to police brutality took on new urgency in the summer of 2020. Ohio is not immune from calls for reform; in December of 2020, within the space of three weeks, two Black men were shot and killed by law enforcement in Columbus. Racialized violence and lack of trust in the policing institution are well-documented and not surprising: Black Americans are disproportionately impacted by issues that place them in higher interaction with the police, such as the school-to-prison pipeline, segregation into communities that lack sufficient resources to meet basic needs (like housing, food, or employment), and well-documented implicit biases operating within the criminal legal system.

Policing and community safety can be done differently. For example, shifting the responsibility for mental health emergency calls from armed police officers to social workers and other mental health professionals better ensures appropriate responses with reduced potential for harm. Properly resourcing mental health and public health systems, including the decriminalization of mental health challenges, and exploring options for de-militarizing police forces are all important steps for reducing harm.

It is well-documented that one’s zip code can predict one’s life outcomes along a range of indicators, including those that are health-related. While race is not a social determinant of health, racism is. Historic segregation, marginalization, and discrimination in housing, education, employment, and the healthcare system negatively impacts Ohio Black residents’ quality of life compared to their white counterparts.

The disproportionate impact of COVID-19 on the Black population is only the most recent example of a long history of medical disenfranchisement and health inequities.

The state of Ohio should adopt this stance as well, and then move swiftly from declaration to action by applying a racial equity lens to the programming and resourcing of all health-systems—including mental health—so that historically marginalized Ohioans can receive better access to health and healthcare. 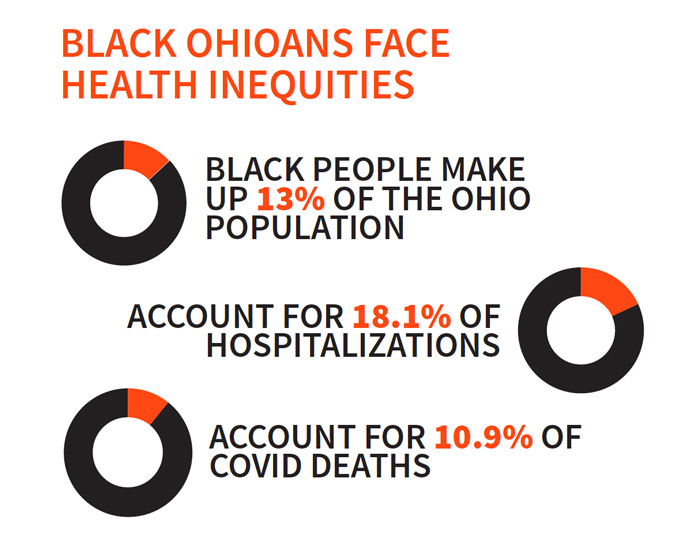 Digital connection and broadband use is now integral to participating in society. From education, to workforce development and gender equity, to health care access, digital equity touches every aspect of social justice issues. Traditionally treated as a rural connectivity issue, the pandemic has highlighted the digital divide that exists even within our urban communities. The importance of digital access has only increased in the midst of the pandemic, and will continue to be important for access even as we begin to emerge from the acute crisis of the pandemic.

Investments from the State into public broadband infrastructure will help bridge the gap between those with access and those without. Regulating the industry as we do with any utility would ensure affordable access for those without stable access today.